“Catholic schools…are more than just institutions for equipping pupils with knowledge and skills necessary for the workplace and responsible citizenship. They are intended to be communities, where spiritual, cultural and personal worlds are harmonised to form the basis of the values, motivation, aspirations and the moral imperatives that inform individual choices and actions.” [Andrew B. Morris]

The Church establishes her own schools because she considers them as a privileged means of promoting the formation of the whole person. Ultimately, a Catholic education is intended to contribute to the common good of society by helping develop highly educated, skilled and cultured individuals who recognise their civic responsibilities.

What then are the key characteristics of a Catholic education? There is no universally accepted single, overriding goal for Catholic schools, and most of the curriculum content will be the same as for a secular school. But according to Vatican II, “what makes the Catholic school distinctive is its attempt to generate a community climate…that is permeated by the Gospel spirit of freedom and love.” [Dermot A. Lane].

Catholic schools aim to create purposeful, prayerful and active religious communities, they look for ways to help the disadvantaged and seek justice and truth. They are strong on ethos; create a sense of belonging; value everyone equally; are proud to have objective values that are not open to the whims of fashion; open to other faiths and cultures; have excellent pastoral care and advocate responsible citizenship. Though many secular schools would rightly claim to offer much of the same, the fundamental difference is that Christ is at the heart of the Catholic school. This involves the integration of the Gospel and the Christian philosophy of life with the rest of the curriculum.

The demand for Catholic schooling comes not just from Catholic families but millions of others who though not yet ready to embrace the Catholic way of life for themselves, recognise the value of an education infused with a religious philosophy. Consistent reports show that Catholic schools contribute greatly to a favourable attitude to religion among their pupils, make children more secure in their own identity, and this security makes them more likely to be open towards others and other cultures [Andrew B. Morris].

Archbishop Vincent Nichols, has strongly endorsed faith schools, stating that “social and community cohesion would not be achieved without recognising the role of faith” [The Catholic Times, Sunday April 12th 2009]

For further information on the history, role and purpose of Catholic schooling, please see the following publications:

St Mary’s Catholic Voluntary Academy to be the UK’s first biophilic school as part of a pilot scheme for the Department for Education!

We are delighted to finally be able to share the wonderful news relating to our proposed new school. Also, there are still a few places left for September - ring school for more info! 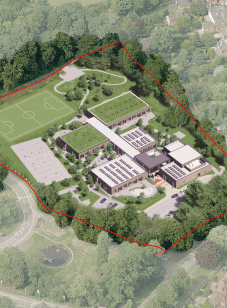